Jessie Stow picks up award at The National Apprenticeship Awards 2019

Jessie won two awards earlier in 2019 at the regional awards and became a finalist for the National Lloyds Banking Group Award for Rising Star of the Year at the national awards.

The National Apprenticeship Awards 2019 took place in London and were hosted by TV personality Reggie Yates. The awards aim to recognise the success of apprentices on a national scale and showcase the employers supporting them. 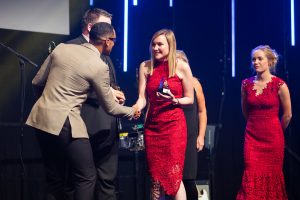 While Jessie didn’t win the award for Rising Star of the Year, which was based on a public vote, she did pick up an award for being ‘Highly Commended’ in the Higher/Degree Apprentice of the Year category.

We asked Jessie how she felt about her award, she said:

I am absolutely delighted to win the Highly Commended award, it represents the hard work and dedication that I have had for my apprenticeship.  I have been an apprentice for four years now, and I am due to complete my apprenticeship and achieve my Applied Chemistry BSc next summer.  It has been a long but exciting journey, with so many opportunities along the way.  As part of my apprenticeship, I have presented at local schools and at scientific conferences, as well as having the chance to learn first-hand from other scientists in industry.  I would like to thank Astex for providing me with training and the amazing opportunities that I have had through my apprenticeship.  I have had continued support from my family, friends, manager and colleagues which I have always appreciated. It feels fantastic to have been nominated and recognised as a national winner and this really highlights just how brilliant apprenticeships are.

I would also like to add a thank you to everybody who voted for me in the rising star category, even though I didn’t receive anything for this, it was fantastic to have so much support for my nomination! 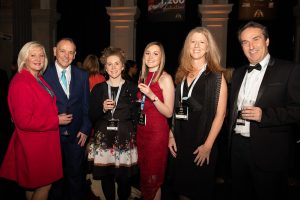 It was a pleasure to support Jessie at the awards event, which showcased and celebrated the very best young apprentice talent in the country. To be a national finalist is an outstanding achievement and Jessie should be extremely proud of her well-deserved commendation.

Congratulations and keep up the good work Jessie!