According to experts, a deserted oil tanker described as a “floating bomb” that is currently anchored off the coast of war-torn Yemen has the potential to ... 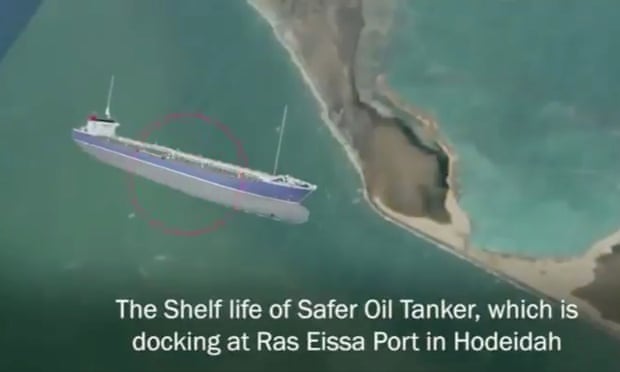 According to experts, a deserted oil tanker described as a “floating bomb” that is currently anchored off the coast of war-torn Yemen has the potential to create an environmental disaster.

A byproduct of the battle between the Saudi-backed UN Yemen government and the Houthis, the tanker, containing over 1m barrels of oil, is said to be eroding fast, but UN officials’ plans to visit the ship to assess the scale of the damage have been blocked. There are fears that gases have built up in the storage tanks, which means the ship could explode.

The UN-recognised Yemen government has warned in a letter to the UN of a “bad and deteriorating situation” that threatens an “imminent environmental and humanitarian catastrophe in the Red Sea”.

Doug Weir, director of the Conflict and Environment Observatory, said the cause for concern was genuine. He told the Guardian: “Until a UN technical inspection takes place it is difficult to determine the precise risk that the vessel poses, however the potential for a serious environmental emergency is clear. An explosion leading to a spill would have a severe effect on the Red Sea marine environment, and on both biodiversity and livelihoods, an emergency made worse because the ongoing conflict would hamper efforts to control and respond to the pollution it would cause.”

An increasingly frustrated Lowcock told the UN security council last month “If the tanker ruptures or explodes, we could see the coastline polluted all along the Red Sea. Depending on the time of year and water currents, the spill could reach from Bab-el-Mandeb to the Suez Canal, and potentially as far as the strait of Hormuz,” he added.

Owned by the Yemen oil company, Safer allows vessels to moor offshore and transfer oil extracted and processed from operations in the Marib oil field in central Yemen. The tanker contains 34 crude oil tanks of different sizes and volumes, amounting to a total capacity of around 3m barrels.

Article from The Guardian
Image shown – from a Yemeni government video warning of a possible oil spill into the Red Sea. Photograph: @Yemen_PM / Twitter

« Why is so much attention being paid to major hazard leadership?
The importance of the safety of your workers »
Twitter Facebook Email Linkedin WhatsApp